The Friday hawt chicks & links is not often shocked by whatever pollution our clown world throws up of mind, body or spirit. In truth, we have become inured to the daily offerings to Baal. But if you walk the dusty streets and you filter out the rainbow flags, the colored hair, the ubiquitous tattoos, the sloppily dressed and the faces contorted in rage as ugly words spill from diseased and rotten mouths, then you yourself are part of the general tableau. As the prissy saying goes, you aren’t stuck in traffic; you are traffic.

Even a brief perusal of the webs this dark October morning has brought up several such examples of which even I was somewhat surprised. When global corporations subvert institutions and use them to push the globohomo agenda, in all honesty I was reluctant to admit that they would be effective. But just because they are not effective on me does not then mean that they do not affect others. So we have a few examples this week that managed to raise even this old crusty eyebrow in surprise.

So let the show begin.

Care of Didact I was the unfortunate viewer of the following short video where what is supposed to be a man watches the release of a Star Wars film trailer. It’s … well, just watch for yourself.

Apart from the fact that he looks likely to die from skin cancer, this is simply beyond belief. How can we call this travesty of masculinity a man? I know that it’s bad out there, but this? This is what happens when we live in a world without hope. The only positive aspect of watching this is how better it will make you feel about yourself, no matter your circumstances.

Dalrock introduced me to a meme of which I was entirely ignorant – the Karen.

But in a nutshell there are two primary themes of the Karen meme:

An entitled/pushy woman who demands to speak to the manager.

A selfish mother who kicks her children’s father out of their lives.

But it was the haircut that jumped out at me:

This Goddamn haircut is the epicentre of the most unexplainable phenomenon in the history of mankind and a constant thorn in the side for anyone who works in hospitality or retail.

The car and those kind-of-long, kind-of-short jeans are the icing on the cake.

Every time a woman with the CISTTM haircut strolls into our cafe, a sharp, stabbing pain lodges itself just below my left ribcage.

The pain is the byproduct of history, which has proven no matter how prompt and courteous the service is, no matter how delicious the food may be, no matter how clean the toilets are, the CISTTM banshee will strut up to the counter with shotgun fully loaded with disapproval. Said shotgun will be fired at my face until I am battered and bruised, at which point CISTTM will drop her signature catchphrase: “can I speak to the manager?”.

Neither myself or any of my colleagues have worked out why every female with the CISTTM haircut is destined to complain, but as hospitality workers, we can say that this meme is 100% certified accurate. And again, like in so many other circumstances, the internet is imitating art imitating life. 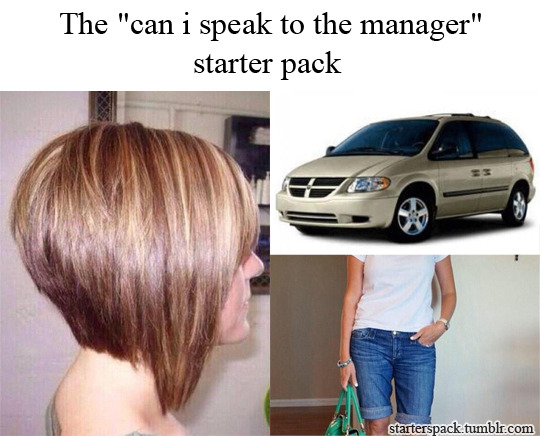 The Karen meme has been around for some time, yet so far feminists appear to have managed for the most part to avoid the temptation to scold it as sexist. They appear to understand that lashing out at the meme and defending “Karens” as not evil, but the embodiment of feminist virtues would only make the meme more powerful. This is impressive collective restraint in the face of widespread thought-crime, but I wonder how long such forbidden thoughts can be tolerated before feminists can’t contain themselves any longer.

Dalrock is being exceedingly generous here. I very much doubt that the feminazi hordes even know that this meme exists. I mean, the hawt chicks & links was ignorant of this monstrosity so what are the chances that the rug-muncher brigade knows what’s going on?

More and more people are waking up to the fact that our society is feminized and that this is not a good thing.

Women in civilized societies don’t behave the way the harridans of today behave. But then, ours is a society that tells women who elect to be homemakers and mothers that they’re “wasting their lives.” It encourages children to experiment with homosexuality. It encourages them to believe that they were “born the wrong sex”…and permits their mothers to convince them of it, especially if they have penises. Indeed, ours is a society in which it’s legal, de facto at least, to kill fully-born infants. Any who dare to decry these things openly are condemned as “bigoted” and “intolerant.” If those don’t disqualify us for “civilized” status, I can’t imagine what would do it.

But some women are waking up to the true awfulness of what was planned for them and are attempting to return to the better lives that their grandmothers and great grandmothers enjoyed. Woman quits job to ‘spoil husband’ like a 1950s housewife.

After three years of happy marriage, and getting stressed out by her job in a busy payroll department, she decided in 2018 to turn back time — and live like a 1950s housewife.

That’s when Holte, 30, transformed her Hillsboro, Oregon, home into a suburban shrine to the pre-ERA era, busying herself cleaning, making dresses using vintage patterns — and getting dinner on the table by the time her husband, Lars, 28, gets home from his job as an engineering manager.

“I feel like I’m living how I always wanted to. It’s my dream life and my husband shares my vision,” she says as a vinyl Doris Day soundtrack plays in the background. “It is a lot of work. I do tons of dishes, laundry and ironing, but I love it and it’s helping to take care of my husband and that makes me really happy.”

Yes, her closet is full of “flattering” frocks she sewed herself, and the home’s decor is retro as all get-out, but it’s not “like it’s a museum,” Holte tells PA Real Life.

“When I look at everything that is happening in the world now, I feel like I belong in a nicer, more old-fashioned time,” she says. “I agree with old-fashioned values, like being a housewife, taking care of your family, nurturing the people in it and keeping your house in excellent condition, so everyone feels relaxed.”

Taking care of your family is now viewed as an old fashioned value. Now this woman does not have to trudge into the city to some meaningless make believe job in an office cubicle. Instead she gets to stay home and play home, like she probably would have enjoyed playing make believe about as a child. Her husband is a most fortunate man indeed.

Another relaxing and insightful travelogue video from Roosh on the road.

Teenager kills himself after coming out as bisexual via text message and being bullied about it.

The kid’s family has turned this into a story about “hate” (“Being gay shouldn’t be a death sentence”) but if you don’t want to be “outed,” maybe don’t be sending “sexually explicit text messages”?

Really, would it have been any better if the kid had been sending heterosexual explicit messages? That could have led to accusations of “harassment” that might have been just as damaging. There is simply nothing good that can result from talking dirty on text messages. Before cell phones, before social media, before the Internet, there was a lot of stuff people got away with because of plausible deniability.

I’m just stunned that a kid was bullied for being gay. I mean, weren’t we all told that being gay was the new thing? Color me confused, Sherlock.

Anyway, the only people who can swing both ways are girls because it’s funny, we like to watch, and it greatly helps in identifying the crazy if you happened to miss it via the tattoos, the lack of dress sense and the overall crazy behavior.

Do I have to explain why Hemsworth has no one but himself to blame? He and Cyrus first hooked up about 10 years ago and were on-and-off for quite a few years before they married, and he should have seen that she was definitely not wife material. Miley Cyrus will never mean anything but misery to any man fool enough to get involved with her.

Oh, and her “bisexuality” is just another symptom of her borderline personality disorder (BPD). There are no sane bisexuals. There are gay men and lesbian women who have both feet on the ground, but every bisexual is a bundle of neurotic craziness. And when you examine Miley Cyrus’s life history, it’s a laundry list of BPD symptoms. 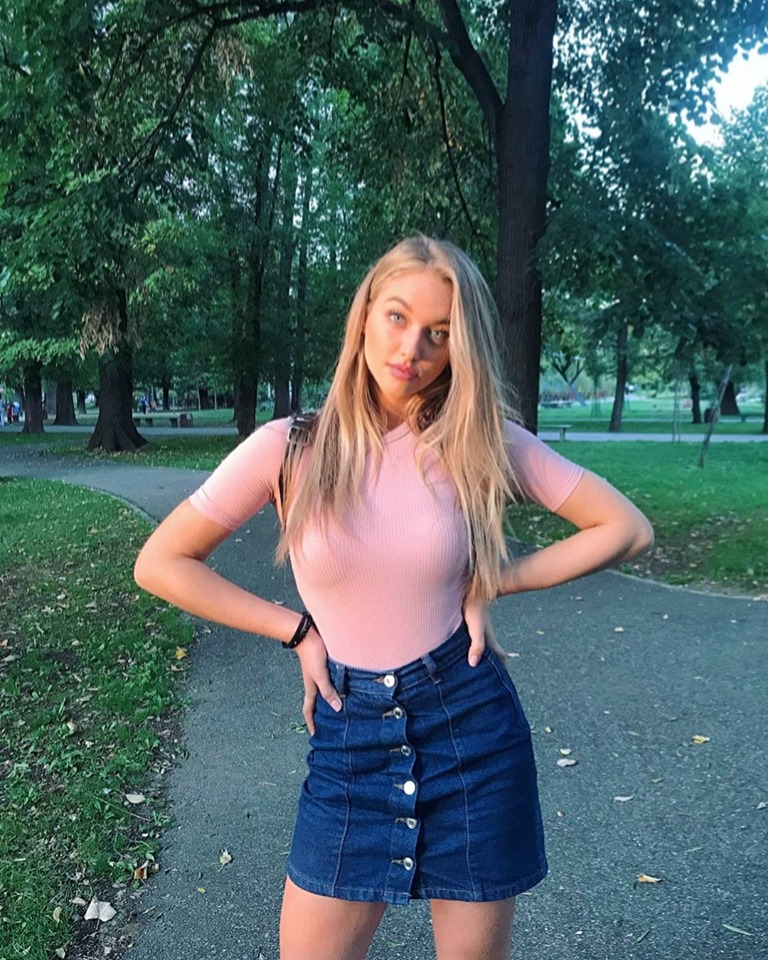 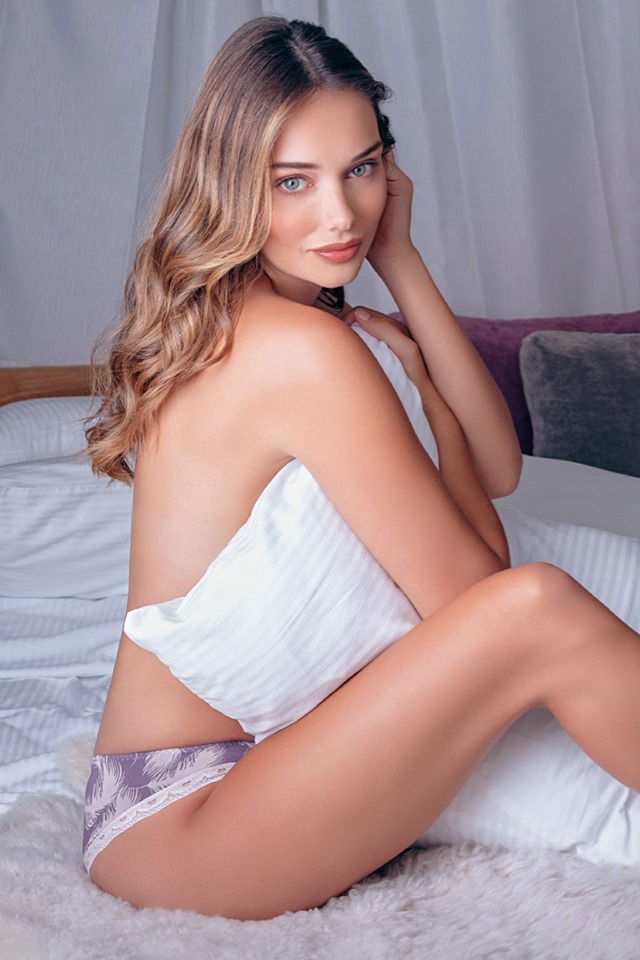 The totalitarian church of gay.