It’s difficult to do a links thread when all anybody is talking about is some virus. I don’t want to link to virus related stuff because you know the drill; either you’re not going to get it, or you’ll get it and then it will or won’t kill you. I can’t do any more than that because it’s all supposition and I’ve already written about what needs to be discussed up to this point in time. Just about the only connection that hasn’t been invented so far is that climate change caused the virus, but don’t worry; that headline is coming to a fake news source near you soon.

Other virus headlines waiting to happen are that women are more affected and victimized by the virus even though it kills more men; transgender people are outraged because special consideration for their special and unique needs have not been given or allocated for at their local overwhelmed medical center; having an abortion will cure you of the virus; Christians but especially Catholics are responsible for the virus and must be made to pay; the only way that we as a planet can recover from the virus is socialism; eating meat is what caused the virus so now that must be stopped; the virus did not kill many people after all so it now makes sense to ban all products made from oil & gas; how my intersectional feminism caused me to contract the virus from a straight white male; gender is a social construct but I’m so relieved that the virus mostly kills Asian people.

I could think of more but that would require another shot of coffee and the virus has caused me to be lazy.

In non-virus news this year’s CPAC which I gather is a Republican convention is currently underway somewhere on the mainland USA. It looks like a classy show that is doing its best to hold up all of those foundational conservative principles. Why, they even have their very own MAGA drag queen.

“Lady MAGA” is “America’s Conservative Drag Superstar! Activist” and just happens to be staying in our hotel for CPAC. My brother Kirby got, uh, her photo (click to enlarge) and my only comment is that America has Lady MAGA while Canada has Jonathan “Jessica” Yaniv.

Don’t hate us for our freedom, bro.

If you take one thing out of Trump’s 2016 victory it is that the Republican habit of the last 50 years of chasing every possible brown, yellow or black vote to the exclusion of all other possibilities just really hasn’t worked out for them. So I would assume that Republicans would be really getting behind all of those white people that turned out to vote for them last time. Right?

Great to spend time with some of our party’s Rising Stars at @CPAC today.

They are fired up to help us win big in 2020! pic.twitter.com/SNEMdaaaEz

And we wonder why we can’t have nice things.

Did you guys literally gather every minority at the conference into one picture?

They’re not the minorities Cliff; we are.

Over here in Europe the Greeks are getting frisky with the hordes of invaders that their own government is dumping on their unsuspecting communities. The locals have taken to a spot of rioting with locking up the police and beating them to a pulp thrown in for good measure. it seems that the Greeks don’t like having their homes broken into, their animals slaughtered and their women and children harassed and threatened. What a bunch of racists!

One interesting aspect of the Corona virus that I would like to bring attention to is its unmasking of Western universities’ chronic addiction to the Chinese student dollar. When I say unmasked I mean a mask that was made of rice paper, torn in three parts and hanging on with a piece of string.

One of Australia’s most prestigious universities is offering cash grants of $7,500 to help Chinese students get around the coronavirus travel ban and resume their studies.

The University of Melbourne is offering the grant to cover eligible expenses including accommodation, airfares and quarantine costs …

The offer comes after the University of Western Sydney and Adelaide University offered students smaller amounts of $1,500 and $5,000 respectively.

The grants could enable students to return to Australia by serving a two-week quarantine period in a third country after leaving China.

So private businesses, (the universities), propped up by forced funding from taxpayers, are openly touting for ways in which to circumvent the government’s travel restrictions so they can make more money with the uncared for and uncalculated risk of bringing in a pandemic.

Here’s a cool link to some lovely graphics exploring the oldest existing company in most nations in the world. Beer features rather prominently. 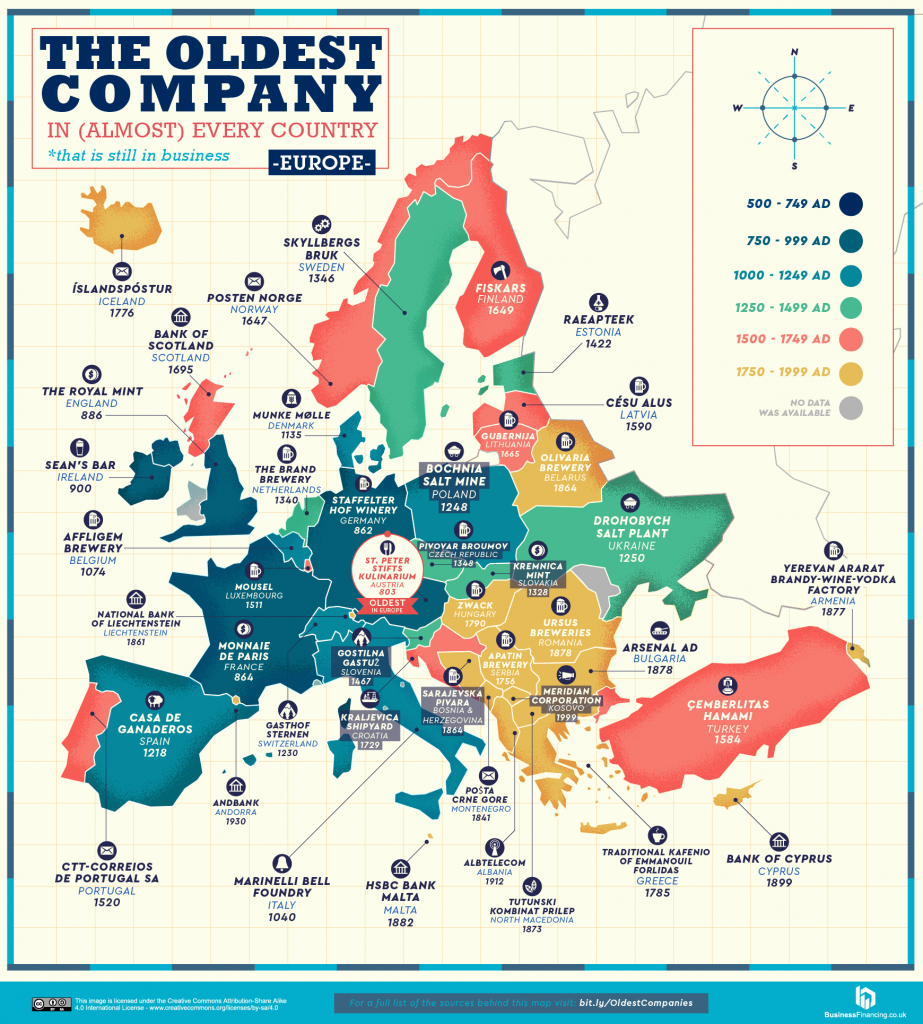 Borepatch wonders if we should trust scientists. I say no. I also say that science is a completely discredited industry that hasn’t produced anything of worth in just about forever, and that it will only return to a position of value when it reclaims its amateur status.

So what does Borepatch say?

Professional scientists game the system with lousy papers, taking attention and money away from legitimate papers.  They do this for exactly the reason you would think – to divert that attention and funding to them, to help their careers.

I’ve written repeatedly about this problem (most recently here, perhaps the earliest here).  And this only covers plain old grifting; politicized science like Global Warming is another elephant in the room.

Another piece on universities, an institution that has been gutted and destroyed by leftists who now parade around with its skin on their sloped shoulders.

Universities are flailing and failing not despite their infatuation with the preoccupations of “the flies of a summer,” but because of it. As many have noted, an alarming higher education bubble now exists, analogous to the housing bubble which burst in 2008. Never has the American consumer willingly paid so much hoping to get so little. Universities addicted to government-backed money are finding it harder to get their fix. As cheap alternatives to the multitudinous campuses offering mediocre education at premium prices pop up online or in storefronts around the country, the law of supply and demand kicks in. The watered-down, mediocre, and aimless college that can’t survive on the life-support of government funding is destined to die. The private university will have to get serious.

Serious about importing as many Chinese students as they possibly can.

Gay, Christian and a former preacher, I’m coming out to help anyone hurt by Folau who probably caused the Corona virus.

I am using this article to publicly come out because I am troubled by a growing resentment towards LGBTIQ+ people. As a gay Samoan man and former pastor, I worry about the pain caused by the Folau saga and that Christianity will be characterised by politicking and gatekeeping rather than Jesus’ love.

This is my story. I have spent most of my life in the closet. This included the many years when I was a pastor in south-west Sydney. Fear of judgment by my Christian colleagues and friends, and feeling responsible to those who looked up to me, prevented me from accepting myself.

Keep in mind when you read this drivel that homosexuality is a sin. Replace the word gay with rapist in the above screed and see if it makes any less sense. If you profess to be Christian let identify with your sinful behavior then you’re a fucking moron. At best.

Finally, Ol’ Remus over at The Woodpile Report is having a tough time of late.

There’s no gentle way to say this, so I’ll not try. My wife is at the end stage of a terminal condition. As is always the case there’s some uncertainty. Weeks are possible, days are probable. Woodpile Report will go dark for a while when it happens.

It doesn’t get much more dignified than that. So I hope that you join with me in wishing the best and praying for him in this difficult time and for his wife in that her suffering is lessened at the end.

Risk, randomness and the plague.