Adding fuel to the fire.

I haven’t had any posts up for the last few days as I haven’t had anything to talk about. There is only so much discussion of the current virus situation that my patience can put up with. What I have said is still my view and nothing is really changing at this point.

About the only thing of note that I haven’t mentioned is the hysterical meltdown of those on the libertarian side of things to just about any government reaction to the current crisis. You can only imagine what this lot would have been saying when nations enacted rationing measures in WWII. Something along the lines of clawing the skin off their faces as they howled at the sky that these measures would never end and that our “rights” had been permanently taken away.

END_OF_DOCUMENT_TOKEN_TO_BE_REPLACED

The Friday hawt chicks & links understands and appreciates that many of you are staying at home playing video games. And a little bit of distraction is a worthy thing. After all, those who do not partake in recreational activities to recharge the old batteries eventually get to a point where the decision is made for them. Even your humble host is playing the odd video game now and then, among other pursuits. But this is an excellent time to get your affairs in order, and old Cappy has a worthy post on this very topic titled, ‘How you can profit during the quarantine.’

Now, Cappy and I agree on many things, but there are some points where we do not see eye to eye. And while there are many excellent pieces of advice in that article there is one thing in particular that I disagree with very much indeed.

Cappy is of the opinion that young men should get vasectomies. In other words, he is pushing for our virile young men to voluntarily neuter themselves. His arguments in favor of this decision are, however based on a young man enjoying the type of self-destructive lifestyle that we were born into as a result of the Boomers and their tearing down of everything. So the term ‘consequence free sex’ was born.

END_OF_DOCUMENT_TOKEN_TO_BE_REPLACED

Who will rise to the challenge?

Rollo has a new article where he refers to a topic from a couple of years ago which he called being zeroed out.

I think it ought to be part of any Red Pill aware man’s understanding that at many points in our lives we will be confronted with the prospects of having to rebuild ourselves. Failure, rejection and disappointment will happen for you, that’s just part of a man’s life, and it’s easy to rattle off platitudes about how many times you get back up being the measure of a man. But what I’m saying is there will be times when total reconstruction of your life will be a necessity.

You will be zeroed out at some point, and how you handle this is a much different situation than any temporary setback. This zeroing out is made all the more difficult when you confront the fact that what you believed to be so valuable, the equity you were told was what others would measure you by, was all part of your Blue Pill conditioning. At that point you need to understand that there is most definitely a hope for a better remake of yourself based on truths that were learned in the hardest way.

I can relate to this having being zeroed out a few times in my life. The most recent one was a near total reset after my sudden and unexpected divorce. This was complicated and compounded by the fact that I was in a foreign country and had only been there for a relatively short time. As far as being zeroed out goes, this was right up there.

END_OF_DOCUMENT_TOKEN_TO_BE_REPLACED

The Great One and I discuss the sheer awfulness of local artists. There might be something about some virus as well.

Drinking away the boredom and germs.

I’ve been into mixing drinks for a very long time. When I was still 17 I set up my own bar in my bedroom complete with glass shelving that I put up myself. I had all the utensils and then when I hit 18 I purchased a bunch of bottles and began teaching myself how to mix drinks. It was about as appalling as you might expect. The low point was a drink that I invented which I christened a ‘sperm bank’. Classy stuff.

Then it was time spent working in bars, pubs and restaurants and then finally owning and running my own late night club in the Italian Alps for a number of years.

In between there was also quite a bit of sampling of the produce, shall we say. Drink was originally invented to make unhealthy water palatable, but eventually it morphed into making boredom bearable. Not bores, just boredom. A drunk bore is the pits of the earth. A fitting punishment for the SJW woke crowd would be to be marooned on some island archipelago with the world’s most boring drunks.

With all that in mind, I do have rather strong opinions on the strong stuff. This enforced period of containment which has coincided with beautiful spring weather has me going into my back catalogue of drink recipes so as to stave off the inevitable boredom.

END_OF_DOCUMENT_TOKEN_TO_BE_REPLACED

Love in the time of Corona.

Today is the first day of spring in the northern hemisphere. Here in the Netherlands it is a beautiful clear day, although a little on the chilly side. Nevertheless, I plan to fire up the charcoal barbeque tomorrow for a decent side of 8 hour pulled pork, the first of the season. I picked it up yesterday from my local butcher. Everything looked normal there but the same could not be said of the city in general. The streets were close to deserted, the shops and businesses mostly closed. A few individuals on bicycles but nothing more.

The times they are a-changing.

I listened to part of Cappy’s latest rant where he goes off against women in general. Apparently guys are getting messaged left right and center by women who previously would not give them the time of day, but now that their made up jobs are on the line they are suddenly overwhelmed with the terror of needing to find a decent provider.

END_OF_DOCUMENT_TOKEN_TO_BE_REPLACED

The headline in The Australian read, Keep away from the grandkids and survive. 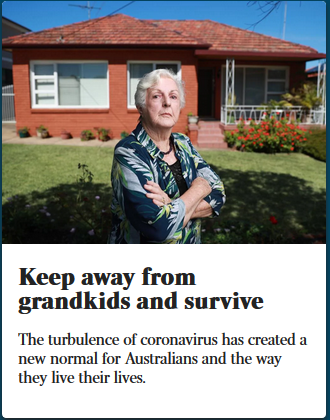 This shouldn’t be a problem at all for the Boomers since this is their default play in the social niceties game. 70 is the new 50 didn’t leave them time in the past to worry about grandkids but now they have the wonderful excuse that this Chinese plague is all about them. So new normal my arse. Bet they still expect the grandkids to line up in the shop queues for them though. I can picture the guilt trips and emotional blackmail right now.

For myself I am doing my bit during this time of pestilence. For example, while playing Civilization VI I make sure to include China in the set up and then to target them mercilessly during the game to the exclusion of all others. Funnily enough, the other AI civs seem to be in on the deal as well. As soon as China is wiped out we all shake hands and then start the game again. Rinse repeat. What do I care? They’re not my people.

So sit back, pour yourself a nice beer, help yourself to a fine cigar and contemplate the mysteries of the universe with this week’s xenophobic edition of the hawt chicks & links.

END_OF_DOCUMENT_TOKEN_TO_BE_REPLACED

As the frenzied buying of basic household items continues, the Australian prime minister accused those of panic buying and hoarding of being “un-Australian”.

“On bulk purchasing of supplies: Stop hoarding. I can’t be more blunt about it. Stop it,” Mr Morrison said.

“It is not sensible, it is not helpful and it has been one of the most disappointing things I have seen in Australian behaviour in response to this crisis.

“That is not who we are as a people. It is not necessary. It is not something that people should be doing.”

This virus is exposing the cracks in the mulitculti facade. The reason for all the un-Australian behaviour is because Australia is chock full to the brim with un-Australians. Our elected leaders and unelected bureaucrat classes have been importing them en masse for 20 years. So when Morrison declares that this is not who we are as a people, he is absolutely spot on but not in the manner in which he intended.

END_OF_DOCUMENT_TOKEN_TO_BE_REPLACED

Something is going on.

Something is going on and it’s not a virus. Speaking of which, I’m at home with the sniffles, also known as the dreaded man flu. It ain’t the Wu-flu as the symptoms don’t match, but I haven’t been sick for almost two years so this is one hell of a timing. So I’m at home, feeling pretty dreadful and with time to peruse the internet.

As I said, something is going on. The stats for this virus are what I would describe as lame-o on the old death by pestilence chart. Viruses such as SARS are openly mocking this Chinese Johnny-come-lately, while the Black Death and Smallpox are sitting in the big boys’ chairs and not even acknowledging that this virus even exists. In other words, as viruses go this one is an omega male.

And yet, the Western world is collectively losing its mind. Leading the way with the hysteria is Europe as borders are closed and businesses shut down. With economies being on life support propped up by historically low interest rates and money printing since the 2008 financial crisis, and with some nations such as Germany already teetering on a recession, this sudden rush to throw the baby out with the bathwater seems to be completely insane.

END_OF_DOCUMENT_TOKEN_TO_BE_REPLACED

The road to living in fear of your wife and changing your actions so as not to upset her is a long and gradual one. And maybe for some of us there is no other option to learn it than to live it, no matter what the best advice may be.