Look on the face of this woman and despair. This is a heretic. She is an instrument of the devil. She desecrates the cross with her very presence. 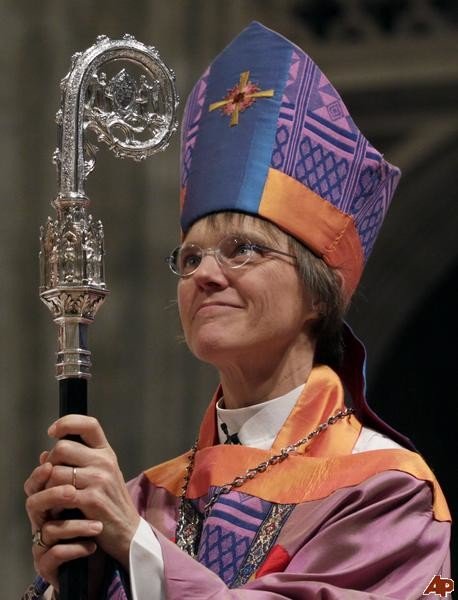 The bishop of the Episcopal Diocese of Washington sharply criticized President Donald Trump for staging a visit to the historic St. John’s Church across from the White House, where he held up a Bible after authorities had cleared the area of peaceful protesters.

The Rev. Mariann Budde, whose diocese St. John’s belongs to, said in a statement Monday night that she was “outraged” by Trump’s visit and noted that he didn’t pray while stopping by the church, a landmark known for its regular visits from sitting presidents since the early 19th century.

“He took the symbols sacred to our tradition and stood in front of a house of prayer in full expectation that would be a celebratory moment,” Budde said in an interview after her statement on Trump’s visit was posted to the diocese’s Twitter account.

She took the symbols sacred to our religion and trod all over them with her lesbian horse face shtick. Note the “wedding” band on her claw-like finger. Project much, you evil shriveled up crone.

The bishop, who last year joined other Washington National Cathedral leaders in a statement that excoriated Trump’s “racialized rhetoric,” firmly aligned her faith with the goals of peaceful protesters driven by Floyd’s death to decry systemic racism.

“In no way do we support the President’s incendiary response to a wounded, grieving nation,” Budde said in her statement. “In faithfulness to our Savior who lived a life of non-violence and sacrificial love, we align ourselves with those seeking justice for the death of George Floyd.”

America is not burning because of joggers on the streets throwing conveniently placed bricks. Those are merely the symptoms of the greater cause. The underlying reason that America is a house divided and tumbling down is staring at you with her beady eyes and shit-eating grimace in the above photo. The takeover and subjugation of Christianity was the act that allowed all of the subsequent outrages.

That is the principle and underlying reason why it’s all going to the dogs. America first, as always, but watch what follows around the Western world. That bitch in that photo is a perfect representation of all that has gone wrong. You can fight as many joggers on the streets as you like but it will do no good at all until the evil behind it is destroyed.

So be clear on who your biggest enemies are.