The Friday hawt chicks & links wishes you all a very unhappy Juneteenth holiday. This is a brand new holiday which has been planned for about 100 years. This holiday is a celebration that black people are good by virtue of the color of their skin, and white people are bad as their own skin tone demonstrates. Whites must stay in their homes and reflect on their inherent awfulness, which can never be atoned for and which will remain until the day that you die. And the way that things are going, perhaps that day will be sooner than you think. 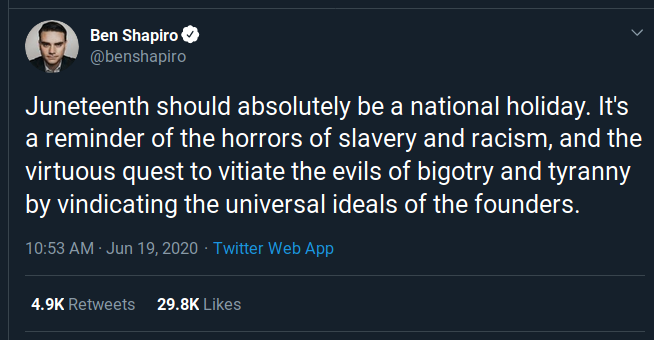 Little Ben has taken off the cotton gloves and has now sprung forth to reveal his true nature. Of course, anyone not calling themselves a conservative for the past four years already had no doubt of where his real allegiance lies. But this sort of message will not be enough for those still holding on to the comforting blanket of conservatism; a blanket that is full of holes, moldy, rank with tired sweat and stained the color of shame. They still believe that conservatism was the answer all along, even though it has got us to this point in time. So little Ben could dye his hair green, tattoo devil horns on his forehead, and run around with his bum on fire in that ridiculous autonomous zone in Seattle, and conservatives will still believe that he is one of them.

And perhaps they are right. Perhaps he is. Perhaps we have been waiting for the wrong people to take off their masks. The rot goes deep and has been an infection for 500 years. But we get to see the end times. We get to see the grand show. No living in a dusty 19th century homestead for us, raising our cattle and our good wholesome family as one. We are the blessed and the cursed. We have ring side seats to the finale but the kicker is that we are part of the show.

So on with it.

The front cover of a Czech magazine.

Let’s have some examples of still delusional conservatives. Alan Moran, who needs to change a vowel in his surname, contemplates the terrifying idea that western society might be destroying its own values.

That a majority of Americans have such self-destructive preferences has profound implications for the future of the greatest society that has ever existed and for those riding on its coattails. Although Trump remains well behind in the polls, more so than at this stage in 2016, the latest Rasmussen has narrowed. But even if he prevails in November, we will likely see the majority of US voters favouring Democratic Party policies that involve standing down the US economy and its policing. Moreover, a less forceful Republican candidate is far less likely to prevail in future contests.

They still believe the same polls that had Hillary at 95% for the win. Because they can do nothing else. It is bound up in all that remains for them. Refuse to believe in the credibility of the polls anymore and the entire edifice unravels. If the polls are bogus then what next? Conservatives and libertarians are alike, drooling retards living in fantasy land. They will be the ones who arrive at the boxcars with their collection of bow ties neatly packed in their Louis Vuitton carry-on.

Trump pulled tens of thousands to his rallies in 2016. Now he pulls hundreds of thousands. During a supposed pandemic. But okay, we get it. The polls.

This video nicely sums up the reality of conservatives today.

The Z Man has a piece this week on the coming civil war. Will he be a hero or a retard? Let’s see.

We are seeing that with the Left now. This is a total war on White people. This means the symbols, the habits, the structure of society itself. This total war is not just fanatics in the streets smashing things. This is a total war launched and funded by the people in charge of American society. As we see with what’s happening in Atlanta, it is a war motivated by vengeance. Blacks and their enablers feel they are justified in whatever they do to harm White society. There are no limits.

Despite normal White people trying hard to ignore what’s happening in the hope it will peter out and they can joyously clean up the mess, it may be impossible to hide in that dream this time. Unlike the past, where the people in charge pulled back after things went too far, the people in charge are now leading the charge into madness. Big tech is pushing this stuff hard. Look at this promoted topic on Twitter. They are promoting this as well, hoping to keep the savages extra angry.

Looks good, looks really good. But we need to get to the end first. The last sentence is the most important. It is where the writer leaves his grand solution for the reader to dwell upon. For an article titled Total War, let us hope that the Z Man really pulls it out of the bag for us.

The only way forward is for White people to rediscover themselves.

So there you have it, folks. The solution to the coming tribal genocide is to eat, prey, love our way out of it. This is called the retard edition for a reason.

Conservatives have always been big on immigration. It’s got the economic benefits! Remember the suburb where you grew up? Is it better now or worse? I have yet to meet anyone who says that their suburb is better. That’s pretty damning.

Here is a lovely immigrant who has been arrested quite a few times. Apart from his 103 arrests, this week he casually strolled along a street in New York and punched a 92 year old white woman in the head causing her to fall to the ground. There’s a nice video and everything.

Geraldine, a Bronx native who has lived in Manhattan for more than 50 years, said she was on her way to Duane Reade when 31-year-old Rashid Brimmage allegedly shoved her to the ground near Third Avenue and East 16th Street Gramercy Park last Friday afternoon.
Geraldine hit her head on a fire hydrant and started bleeding, she said. A passerby saw the assault, called 911 and an ambulance rushed her to nearby Beth Israel Hospital, she said.
The former teacher said her physical wounds were relatively minor and have since healed — but the mental toll has been much more severe.

But that’s okay. He and his kind add to the economy. Free trade! Woo-hoo!

They’ve been at full retard for over 30 years.

A young man plays around with the stock exchange and wakes up with a negative $730,000 balance on his account. So he does what any normal young man would do in this situation; he tops himself. But it turns out that it was not really what it seemed.

In fact, a screenshot from Kearns’ mobile phone reveals that while his account had a negative $730,165 cash balance displayed in red, it may not have represented uncollateralized indebtedness at all, but rather his temporary balance until the stocks underlying his assigned options actually settled into his account.

They say that money is the root of all evil. Explains most of my relationships.

Sovietman writes about getting old. He’s 40. How quaint.

I always thought, as a kid, that growing old would be awful because you’d be aware that you have less and less time ahead of you.  As a teenager I thought how depressing it would be, thirty years old, working every day, with no childhood to return to, only old age ahead.  This feeling was enhanced by the fact that my teenage years were not fantastic, and that the adults around me said they were the best years of my life.

Bison Prepper is cutting and running from the internet.

REALLY PULLING THE PLUG
I’m really going to pull the plug on the Internet. It started as a pain in the ass to use twenty-three years ago, and it is a bigger pain in the ass now that I’ve become addicted to it. Please note, I AM STILL GOING TO BE WRITING. I’m just going back to my origins, a snail mail periodical. This blog is going to become a monthly magazine. I’ll have to publish it on a CD-ROM. There is no way I can afford paper and its postage. Nor any way I’d get you to buy it. The CD’s are going to be expensive enough.

People who use div quotes in their HTML code can’t be ejected from the internet faster in my humble opinion.

Two weeks in a row for Deep Strength. Must be some sorta record. Revisiting dread in the bible with an anti-chivalry lens.

By taking off this feminized/chivalrous lens, we now see that dread / feeling bad is one of the necessary steps to repentance of sinful behavior. We have to recognize that we have done wrong and with that comes feeling bad and guilt. Then we have to give this wrong to Christ to repent and not do it again.

This also scares me because the feminist/chivalrous lens easily flies under the radar to even men who know about intersexual dynamics. It’s also why Dalrock’s observations about chivalry and game’s anti-chivalry effect flew under the radar for so long.

On the 2nd of July I will be one of the speakers at the XYZ Online conference. It’s a week long event and that date is all me. So be there or be a full retard. 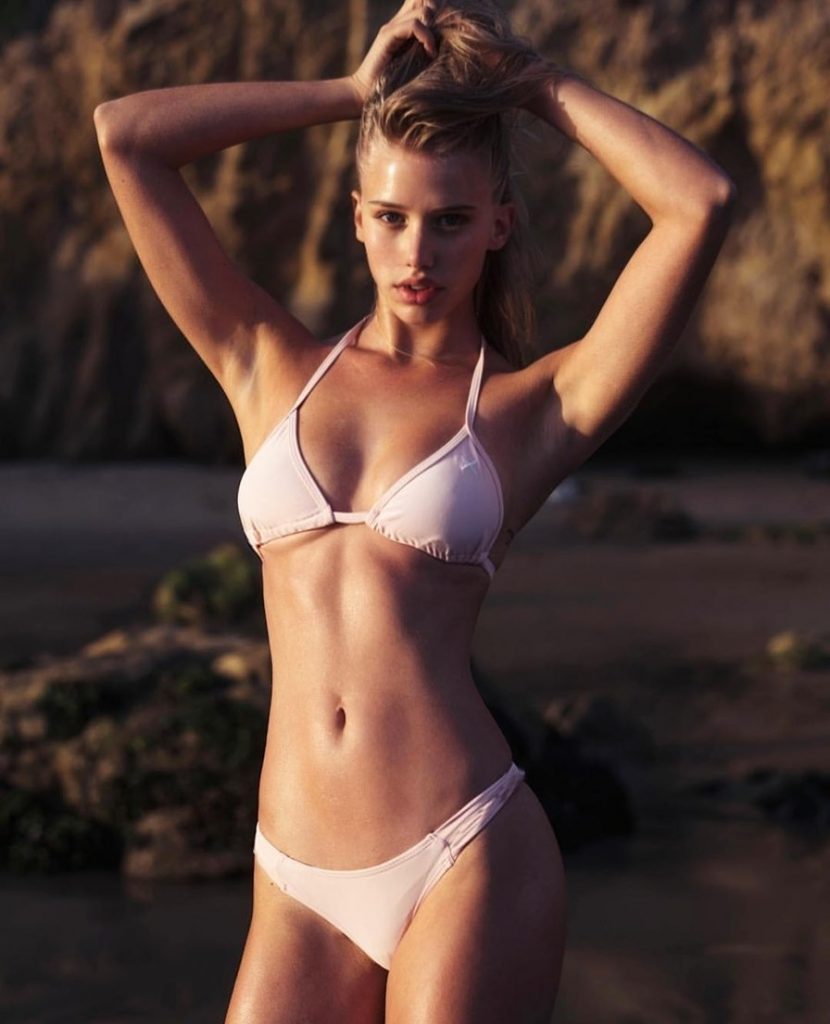