There have been calls this week in MSM outlets that I wouldn’t link to even if you held a banana to my head while singing Don’t cry for me Marge and Tina, for Karens to stop being so racist. Apparently it’s okay to Karen, (I love how the moniker has now become a verb), as long as you don’t do it to anyone whose skin color is not, how do we put this, a lighter shade of pale? (A song no doubt soon to be banished in the great purging of white material).

While I deplore Karens and their miserable and excruciating behavior, I will defend them at all times against all accusations of racism for the simple reason that they are my people and you stand fast with your own tribe. As far as I’m concerned, no white person can be accused of racism to make me care a single whit. They can be caught doing the most unspeakable atrocities which fall under yee old racism banner, and I will shrug my shoulders with a resounding meh.

That’s how all the other tribes behave. It’s time for the whites to not only catch back up, but to take our rightful place in the lead.

And with that, lead on, dear brothers and sisters.

A French author died this week who penned a tome a long while ago which described Europe being invaded by dusky savages after being invited in through bureaucratic incompetence and malevolence.

Twenty-five years ago, when a friend sent me a copy of Jean Raspail’s The Camp of the Saints, it was a book so taboo that you were considered racist merely for knowing of its existence. The 1973 novel, which imagines France invaded by a flotilla of refugees from the Indian subcontinent, pointed out how Western civilization had lost its will to survive, having become decadent, full of self-loathing and racial guilt.

Five years ago, however, when the Syrian civil war produced an influx of “refugees” into the European Union, suddenly Raspail’s novel was recognized as prophetic; even many liberals said the scenes in Europe were reminiscent of The Camp of the Saints. The election of Donald Trump and other politicial events indicative of a “nationalist” mood in the electorate seemed to validate much of Raspail’s critique.

Jean Raspail died at age 94 earlier this month, and his obituary in the New York Times was an act of deliberate character assassination.

Above all else the prog heathen satanic left hates those whose predictions become reality. I’ll bet you’ll be wanting to grab yourself a copy of this book. Well, you had better be quick because this is a screenshot of the book’s page at Amazon at the time of me writing this: 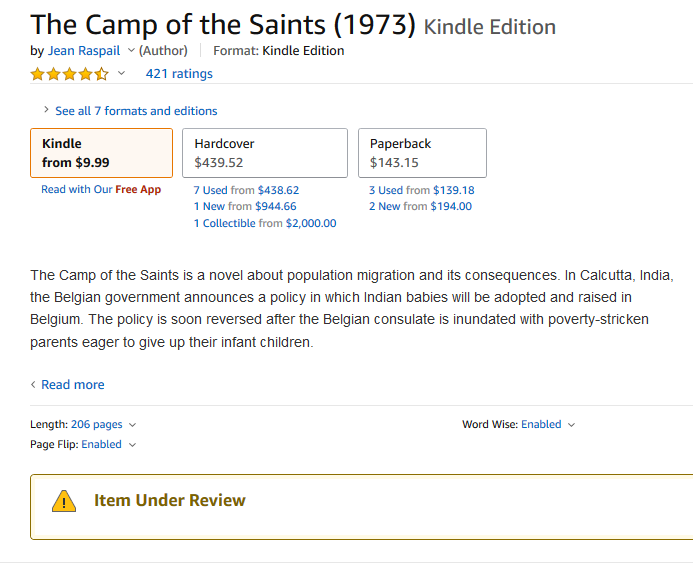 Item under review because bad think that is truthful and accurate and which paints a disturbing metaphor for our troubled times which might rouse the normies to acts of righteous fury is the worst kind of bad think of all.

Which leads on nicely to an excellent piece about the pending government approved auditing of your personal taste in literature, film, music, and smelly underwear.

Have you watched the mandatory diversity programing on Netflix and listened to the requisite race porridge on Audible? (Fuck no, I cancelled them instead, but they have that data forever anyway)

Don’t expect all the rap and dance music on your Spotify playlists to count for anything, mind.

Given how riddled with wokeys these companies are, could you seriously convince yourself that there’s no-one in those companies running database queries to answer all these questions, and then grading you on a curve?

If you think this is never going to happen, I have a bridge to sell you.

My books are made from dead trees, my music is contained on large round vinyl disks, and my film and television selections slot nicely into the opening of this thingamabob called a “DVD player”.

However, I do run this website. Oh noes. I be doomed. The bananas are coming for me.

Vox Day politely stated this week that he does not listen to podcasts, nor does he watch videos consisting of opinions.

If you don’t understand why I absolutely hate all video and auditory informational exchange, let me put it into terms you might understand. I read at around 1,200 words per minute with full comprehension. That’s not an estimate or an exaggeration, as it has been repeatedly and reliably tested over a period of 34 years. I scan-read more than twice as fast as that when I’m reading casually to see if I’m interested in the subject or not. In contrast, videos and podcasts transmit information at around 150 words per minute on average.

And if you factor in the probability that whatever the person is saying in the video is something I already know in considerably more detail than is being addressed, then perhaps you can grasp that I view videos and podcasts as being considerably more akin to sadistic psychological torture than entertainment or inspiration.

I don’t read that fast as I’m not borderline autistic. But I agree entirely with his sentiment on this matter. I don’t listen to podcasts and I don’t watch videos of talking heads nattering away about this watch this video now to know why men should never think of getting married you know the drill. The reasons are for the same as Vox’s but he left out one important point, (although he did allude to it):

People recording these things aren’t disciplined. They ramble on. And on. And fucking on. I don’t have time to just sit and listen to your disconnected ramblings. I have much better things to do with my time. Yes, I record a podcast; for people who like to listen to these things. And what I try to do is to be brief.

Incidentally, Soundcloud just started begging me for my yearly subscription to be paid. Oh no, not going to happen. Not after their black banner went up the other week for you know what. I will return to their free service which is more than fine as it works perfectly well as long as you keep your uploads to under an hour. Win-win.

So if you want any of my old shows that are over that length, you had better download them fairly soon as I imagine they will be disappearing into the ether.

The Great One has a podcast episode which I am not going to recommend to you because I didn’t listen to it because I don’t listen to podcasts. However, with the episode he also posted a good amount of reading material which it so happens that I do consume. And it’s good.

TGO is no longer participating in the mask gayness. Saw a new way of wearing the muzzle today. Mask over nose, not mouth.

Smallpox, chickenpox, and now we are infested with POCs otherwise known as POX.

POX lives only matter if they are killed by white people. POX kill POX all day long on the other side of the planet and no one cares. Half-POX blew up POX with missiles launched from flying robots and no one cared.

In Ancapadise POX and white people could just stay away from each other. But this is not an option in our statist society.

You can thank Cuckservative Republicucks for every aspect of the BLM riots. It was the Republicucks who fought a “civil war” to “free the slaves” and having done so failed to relocate the slaves after the war was over.

This map shows the level of fag acceptance around the world. Think of it is a high water mark before the tide turns. 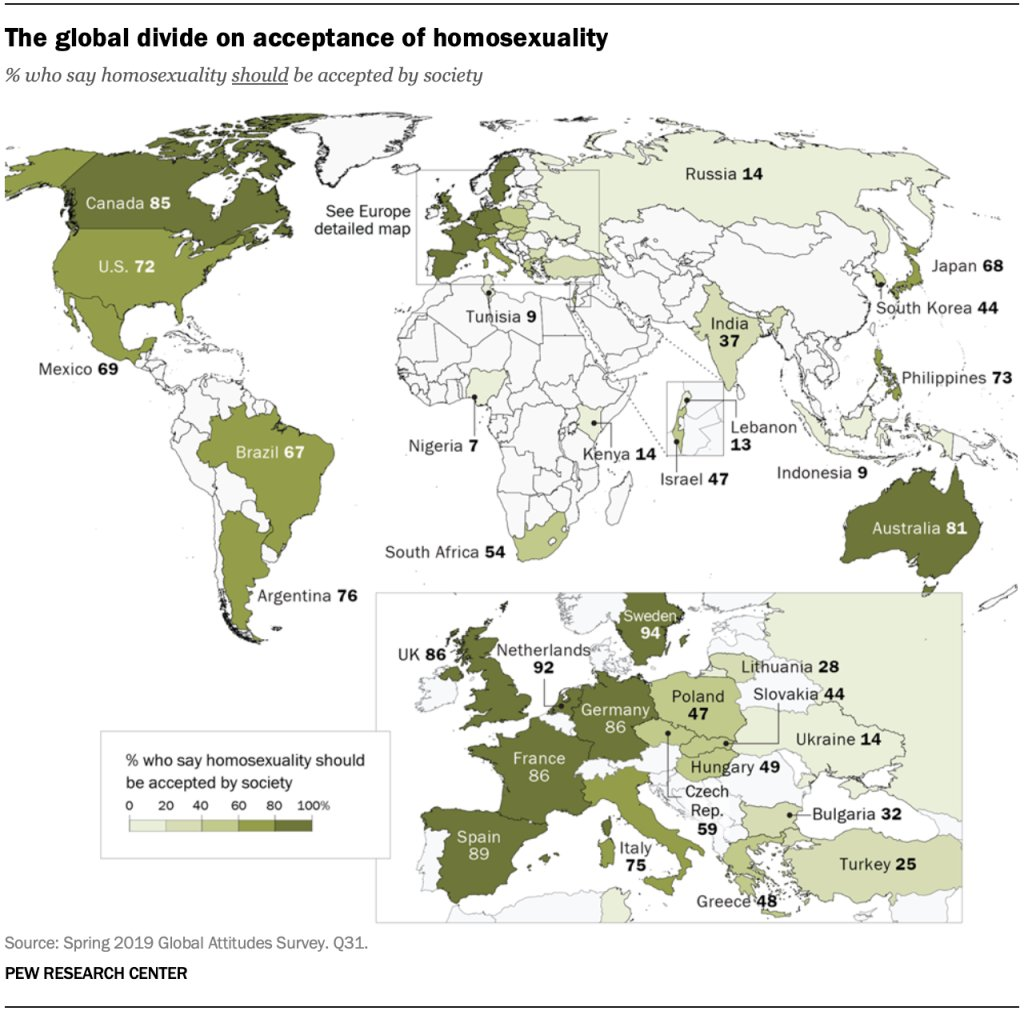 Don’t bend the knee. You must show loyalty and solidarity to your own tribe.

If you’ve bothered to visit the website for the Black Lives Matter organization, you can see all the weird stuff they support. And their founders are on the record as being “trained Marxists“.

We’ve all seen on social media how this has blown up, and how just about every major brand has bent the knee. There’s no doubt that Every. Single. One. of you has a friend that has started posting about this incessantly. And we now see the true purpose. People who were otherwise sane are now biting down on Critical Race Theory when they wouldn’t have otherwise. And Critical Race Theory is nothing but Marxism where Whites are the Haves and everybody else is the Have Nots.

And now, all those people that are hashtagging Black Lives Matter are going to be more open to communism because of the psychology of this. And that’s why there’s so much pressure to bend the knee on this. We’ve all seen the posts. Why won’t you just say “Black Lives Matter,” since it doesn’t mean you support the organization. Why don’t you just say some variation of it instead. Do you think black people should be killed?

Do I think black people should be killed? I simply don’t care either way; they are not of my tribe.

This week’s fake news attempt was a fake noose in a fake NASCAR driver’s garage.

The supposed “noose” was just the rope pull-down handle for the garage door, where somebody had tied a loop in it for a handle. No one who had spent any time around that track could have thought this was a racial threat, but for some reason, NASCAR officials did, and triggered days of hysterical self-denunciation by NASCAR officials and drivers.

… blacks have been internalizing Progressive race speech to the point where they have come to see themselves as a sacred people. The endless doting and fawning has convinced them they are exempt from the rules.

This is most evident with successful blacks. Every black athlete walks around with a chip on his shoulder. NBA players carry on like they are being forced to work the fields, when in reality they live like nobility. No group of blacks complains more than NBA players, despite having so much. This is something you see to vary degrees with all high achieving blacks. The endless adulation from their masters on the Left has led blacks to obsess over their own blackness.

It is that sense of entitlement that keeps the hoax game going. That and there is rarely any consequence to the people promoting these hoaxes. The pint-sized pundit, Ben Shapiro, will never have to explain himself. He got to feel like a hero when he instinctively condemned all white people. Then he gets to be smug, while pretending he was never fooled by the hoax. He’s not alone. All of Conservative Inc. plays the same role in every one of these hoaxes. It’s their job.

This photo sums up for me everything that is good in life. 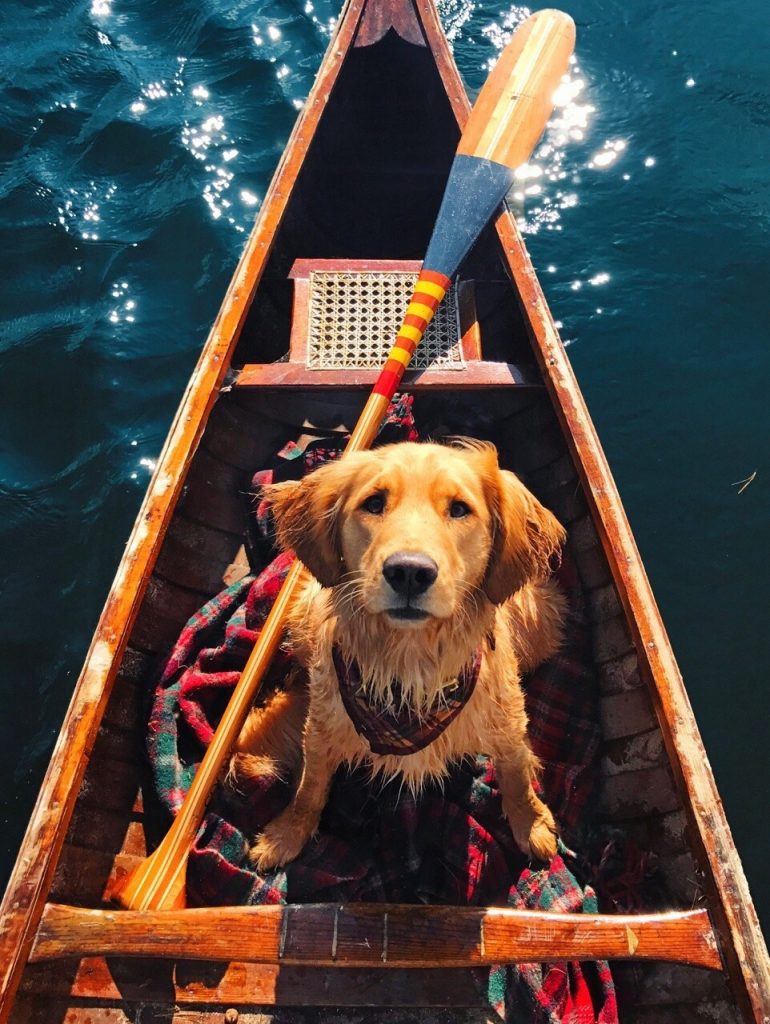 51.1%, kiddies. For the big boys among you. If you add water you are of course a fag. Plantation is such a great name for a rhum distillery. It brings up such wonderful imagery to mind. Relaxing on a wide colonial veranda with the sugar cane stretching out over the lush green fields. Lovely stuff. 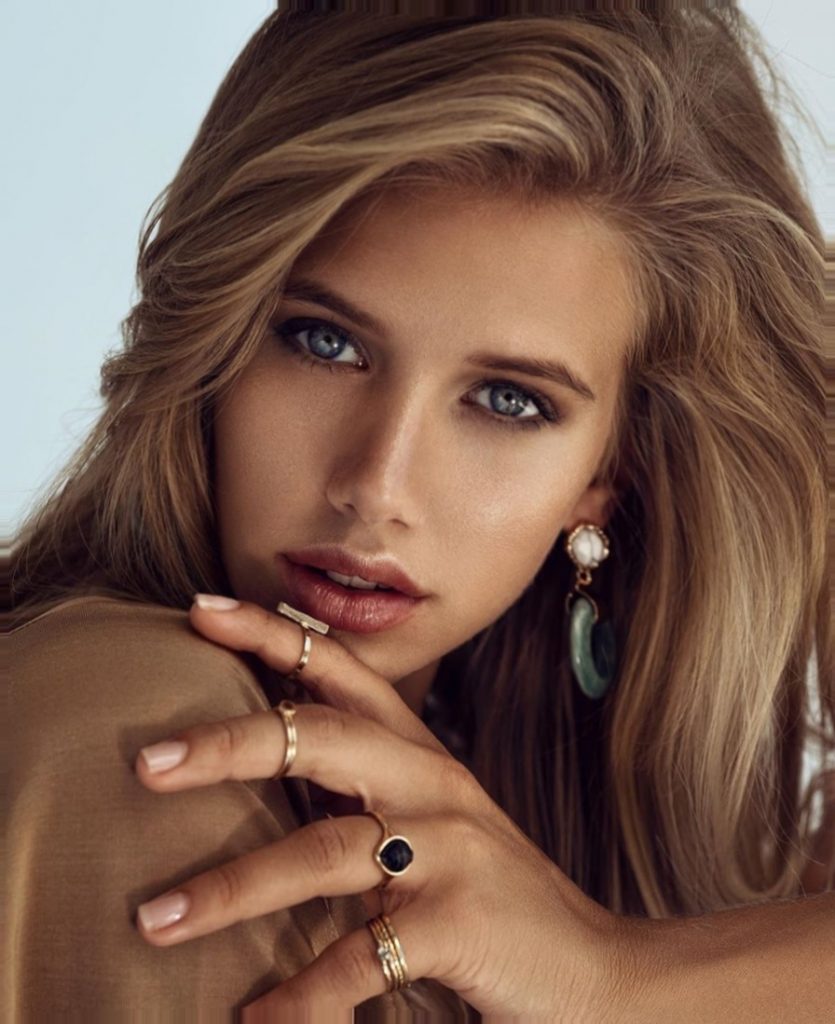 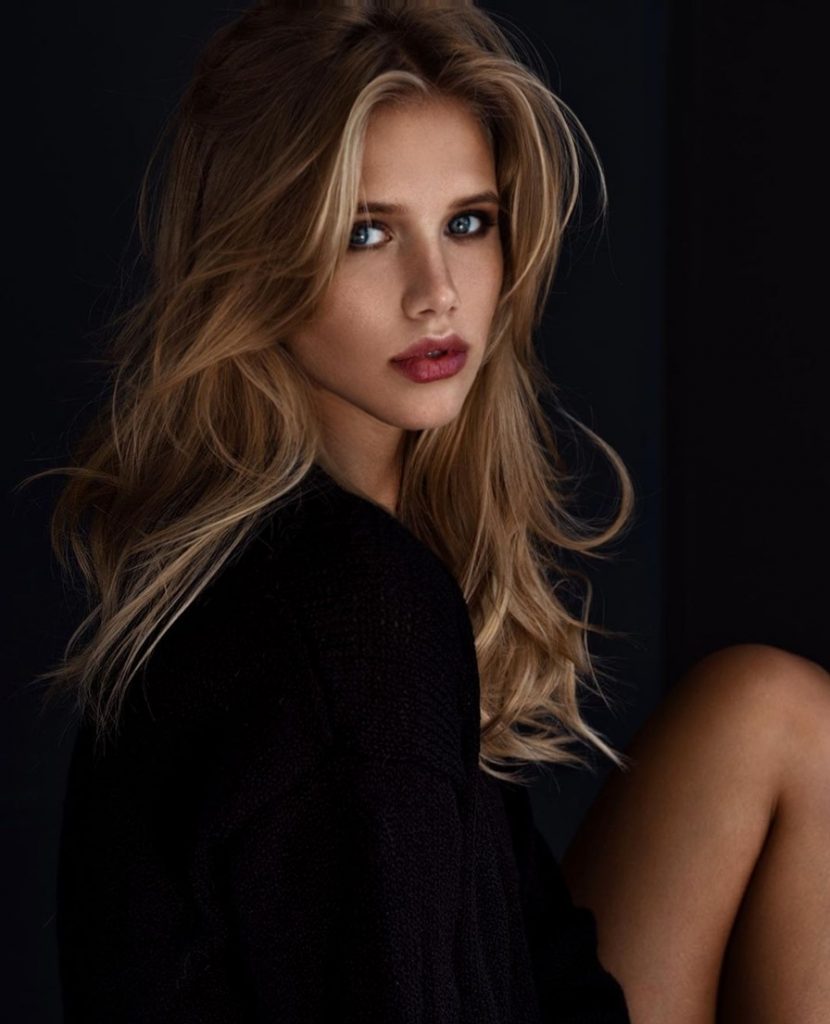 You’re too short for this ride.