This is the typical image one associates with an Antifa member. (H/T Mr Wilder). 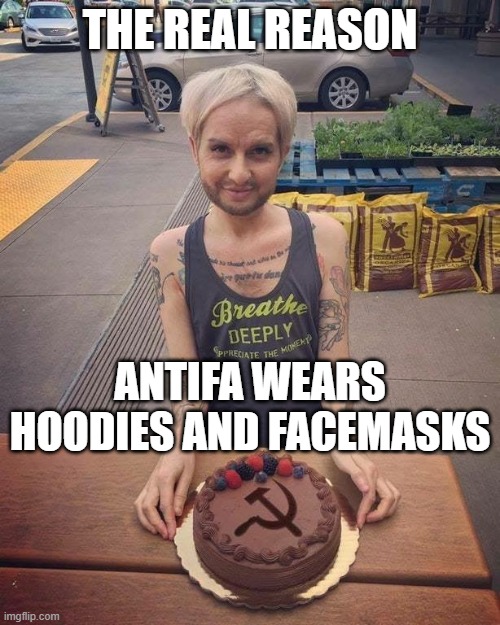 What is critically important to realise is the fact that Antifa have done nothing at all to dissuade us from the belief that this represents them. They have welcomed it. Sun Tzu said that first you must know yourself and then you must know your enemy.

We do not know our enemy. But we are beginning to understand.

Vox Day this week linked to some very thought provoking pieces on this topic. The first one was a report by someone at Survival Blog who spent time carefully observing Antifa at work at the riots.

The biggest observation from the first protest was that despite the claims that they aren’t organized, they are highly organized by a central organization. Ethan and his security/medical team have been at every protest I’ve attended in Michigan, including one at the Capitol an hour away. They use the ubiquitous BaoFeng Handi-talkie radios to communicate …

So what are the lessons for patriots?

Do I believe there will be a time when confrontation is needed? Absolutely.

However, let’s be smart and gather intelligence slowly and carefully first.

So they are highly organised. But that means nothing if their street tactics are poor. Can they fight? Well it looks like not only can they fight but they are much better prepared than decorated US veterans with combat experience.

But in all the training that I’ve been through my life, I’ve never been in one where in the first five seconds of the scenario you’re blinded with a strobe light and sprayed with pepper spray…. That changes everything. They were throwing these rocks from 15 feet back in the crowd, you couldn’t see who the fuck through it, etc. things like that…. It’s just a good talking point for guys that carry concealed, but you need to think through all these different scenarios.

It got way worse after that video ended, they chased us for 11 city blocks. They had a convoy of about 25 vehicles that cut us off at the next intersection, They had scouts on the corner with radios, they had a drone following us, they had a bull horn calling us Nazis, and the crowd was following a red strobe light that was up in the air on a stick, so they would announce Nazis and then people would follow the red strobe light, That video is just the beginning, I’ve got a fucking fractured hand from a baton, everyone of us has black and blue bruises up and down their legs and back, I had a guy spit in my face from 6 inches away, call me a pussy and a coward for not doing anything about it, and then tell me that he was going to find where I live, rape my mother, rape my children in front of me and then kill me.

Finally, a detailed breakdown of the assassination of the random Trump supporter.

The gunman fully expected to surrender and be acquitted by the deeply evil leftists of Portland. I was always careful to tell you that I didn’t know EXACTLY what happened. This death-squad sectarian assassination was FAR more sophisticated than I thought possible …

… Do you take this seriously now? THIS HAS NEVER HAPPENED BEFORE IN ANY COUNTRY. I’ve studied terrorism for 40 years. The killing took 14 seconds. They didn’t arrest the gunman despite knowing his identity, and the the county District Attorney UNDERCHARGED HIM …

… It’s time to stop laughing. And I’m sorry, but you ARE NOT TRAINED to the level that this Antifa death squad was trained.

What he means by this never happening before is that major forces of the State are involved with actively protecting and funding these groups. This is why this gunman walked free, (until the police had to cover the optics and take him out), and Kyle Rittenhouse has to post a million dollars bail money. They must make an example of Rittenhouse so that others are not tempted to fight back.

The combat veterans had weapons but didn’t want to blindly fire into the crowd at those behind throwing rocks. In other words, they wanted to fight fair. War isn’t about fighting fair; it’s about winning.

We need to comprehensively rethink our attitudes to these opponents, to these enemies. This includes Antifa in other parts of the world, such as in Australia. They will undoubtedly be using the exact same tactics if things kick off there.

A final tidbit to consider. This is a passage from the novel The Green Ripper. In it, the hero, Travis McGee tracks down a group of terrorists to their isolated training compound where he infiltrates them. The book was written in the late seventies. This is what he thought upon seeing them train.

At midmorning I saw an interesting tableau from my window. I do not think they realized that I could see it. Two couples. Nina and a young man. Stella and a young man. Out of uniform. Casual clothes. Each carried luggage. Suitcase, or small bedroll or duffel bag. Chuck stood off to one side, watching them closely. He had a whistle in his mouth and what was apparently a stopwatch in his hand. I could not understand the instructions he yelled at them. They walked close and lovingly, laughing and talking together, looking at each other, not at their surroundings. When the whistle blew, they would snatch at the luggage, yank it open, remove an automatic weapon, let the luggage fall to the ground, stand with their backs to each other, leaning against each other, almost, in a little deadly square formation, hold the weapons aiming out in four directions, and revolve slowly.

Then they would repack and do it again. I think I watched fifteen rehearsals. Their time improved noticeably. I guessed that they had it down to just about four seconds before Chuck ended the exercise. Four seconds to change from two couples, lounging along, laughing together, to an engine of destruction.

Every Antifa member that has been killed or unmasked in the past couple of weeks has been revealed as a convicted criminal, some with quite disturbing rap sheets. In other words, they have nothing to lose. They are highly trained to reach demonstrable objectives on the ground of their own choosing. These guys are not the cartoon idiots that we were encouraged to believe. They are far from it.