Shakespeare would be jailed under Yousaf

When I heard the news this morning that the Scottish parliament was considering passing a bill that would prosecute people in their own homes for hate speech I made an immediate assumption based on my deep personal bias and intolerance, a bias and intolerance which I cherish as it has saved me more than once from a sticky end, such as when walking down some sewer ridden Kampala back alley and a man steps out of a boxing gym and asks me if I’d like to sleep with his sister.

But before we get into my deep and valuable prejudices, let’s get an idea of what we’re talking about.

However critics fear the Hate Crime and Public Order Bill, which centres around plans for a new offence of “stirring up hatred”, will stifle freedom of expression.

BBC Scotland, Catholic bishops, the Humanist Society of Scotland, and the Scottish Police Federation are amongst those to have raised concerns, along with Mr Bean star Rowan Atkinson and writer Val McDermid.

Because of this, Mr Yousaf was forced to amend the legislation and change the controversial “stirring up” offences section which has been condemned by opponents.

It now means “stirring up offences” would be limited to “intent” relating to age, disability, religion, sexual orientation, transgender identity and variations in sex characteristics and therefore prosecutions could only be brought in this respect.

Mr Yousaf? That’s a strange name for a Scot. Of which clan does he boast of being a member? And what is the style of his tartan? 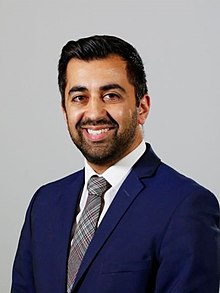 From both wikipedia and infogalatic:

The fact that he was born and raised in Scotland makes no difference as to his primary and emotional drives. He acts and responds as a Pakistani or a Kenyan. Exhibit 1 is this abortion of a bill which he has presented to parliament. No other evidence is needed.

Yousaf is on record in the Scottish parliament of officially complaining that the country is too white. It would be interesting to move to Pakistan as a white-fella, get elected to parliament, (not gonna happen), and then complain that the country is too, how shall we say, Paki. It would seem slightly incongruous, but the West does not understand that word anymore. Our leaders’ rush to virtue signal overrides all ability at rational conjecture. Much better to bemoan the awful inherent racism of your own constituents than call out a rabble rousing foreign interloper intent on destroying the institutions for which ten centuries of valiant Scotsmen shed their Scottish blood.

Mr Yousaf said theatre directors and journalists should not be exempt from the bill, to prevent activists stoking tensions under the cloak of dramatic licence or freedom of expression. He said: “We wouldn’t want to give the likes of Tommy Robinson a defence by saying that he’s ‘a blogger who writes for The Patriot Times so my reasonable defence is that I am a journalist’.”

In other words, no criticism of the prevailing orthodoxy and power will be tolerated in backyard amateur theatre productions who misstep slightly when they paint their faces blue. If Shakespeare were alive he would most certainly fall victim to the Yousaf Muslim thought police as he penned his latest work where he mentioned in passing that someone who lent him money once might have been a Jew.

Mr Yousaf said that there should be no “dwelling defence” in his bill. He told the Scottish parliament’s justice committee that children, family and house guests must be protected from hate speech. He told MSPs: “Are we comfortable giving a defence to somebody whose behaviour is threatening or abusive which is intentionally stirring up hatred against, for example, Muslims? Are we saying that that is justified because that is in the home? . . . If your intention was to stir up hatred against Jews . . . then I think that deserves criminal sanction.”

A Muslim attempting to legislate so as to protect the feelings of Jews? Surely we are at full farce by now.

The ridiculous nature of this bill and how it has evolved is merely symptomatic of our lunatic times. In a sane world a creature such as Yousaf would be strung from the nearest lamp post while his compatriots were summarily booted out of the country with the good fortune of leaving with their lives. The way that things are going, that may well be one of the only two possible future options available to close the multicultural accounts.

The Friday hawt chicks & links – The fate of the world edition