This is why prog women are so angry all the time

There used to be a video gaming site called The Escapist which was popular for about three weeks in 2007. It was a Marxist progressive infested shithole before most of us even began to understand what that meant. Apart from gaming it attempted to cover stuff called “popular culture” which was code for, ‘gradually infect your audience with strange terminology like “white privilege” and “intersectionality”, whatever the fuck that means.’ One of its popular culture attempts was movie reviews which were covered in cartoon video form by a guy calling himself “Movie Bob”, whose real name is Bob Chipman.

The Other McCain did a piece on Movie Bob where it turns out that in the last few years Movie Bob has outed himself as a male feminist.

Another of his stock phrases was “properly evolved” as a synonym for progressive. If you vote Democrat, you’re “properly evolved,” otherwise you are a Neanderthal, according to Bob Chipman.

Making politics the measure of one’s genetic worthiness is profoundly problematic. One cannot breed ideas; intellectual abstractions are not hereditary; beliefs are not part of your DNA. But you see that Bob Chipman latched onto this notion of progressivism as proof of superiority for a very simple reason: In no other way is he superior.

As a matter of fact, Bob looks defective, like someone suffering from a bizarre malfunction of the endocrine glands. He is visibly unhealthy. It is highly unlikely he would ever find a woman willing to bear his children and, therefore, he’s a failure from a Darwinian perspective. 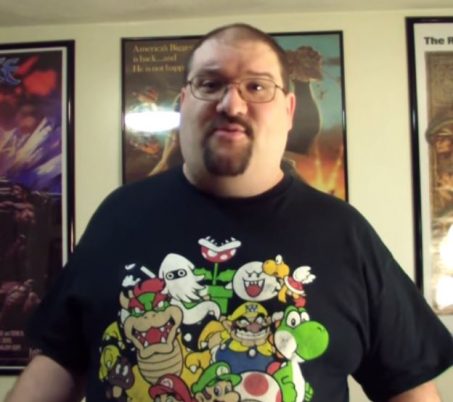 This is admittedly for me not the image that comes to mind when someone goes around mouthing off phrases like properly evolved. I’m starting to think that the Aryans had a point. Movie Bob has an indeterminate age, which is not a positive for him. But I would posit that physically he is somewhere in the range of late forties to I don’t know where. Whereas on an emotional and maturity level I reckon we could peg him at about the same evolution as Phillip “Duckie” Dale.

For prog women this is a man as far as that goes. So I’m beginning to understand why they’re so angry and frustrated all the time. I’m also more in tune as to why they consider themselves to be superior to men. Now, Movie Bob is an extreme example of the unfortunate male going down a path of pure soy. And his eugenics-themed pronouncements are an obviously direct reflection on his own inability to ever make a man of himself. Much better to tear everyone down to your extremely low level than to attempt to move yourself up a peg or two.

But men who infest the left are the same as Bob although on different levels of failure. The obvious disgust in the failure to be a man is the same whether you are on Movie Bob level or plain old Bob who just wants his wife to be his best friend and his soul mate, he really does you know. The guy who will do anything to make his marriage work as long as it has to do with saying yes to his wife. The guy who will get upset at his buddies for making a joke like, “How do you make a woman orgasm? Who cares?” The guy who has swallowed all the Kool-Aid and believes in all of the Lies. The guy who wants to be an “ally” to women. With allies like these, you better have really ineffective enemies. Or you might just be beyond desperate.

Poor old prog chicks just don’t know what it’s like to swoon for a man. The only way that they can experience swooning is when someone like Movie Bob slips a mickey in their drink. While a lot of this post is of a humorous bent at others’ expense, the underlying message is deadly serious. We can’t wait for the womens to fix themselves, that ain’t ever gonna happen. Rather, men have to become good at being men and then the ladies will gladly follow.

Because you have no balls. And your fathers had no balls.