Husbands must not unburden themselves

Over the last month, Jack at Sigma Frame has been running a series on the subject of masculinity. It’s been an interesting and informative series of discussions, although I have not followed all of the topics due to my at times overfamiliarity with the subject matter. In his roundup of the series, Jack approached some of the major questions raised and it was here that I found a real nugget. Once again, it is on a topic that has been gone over very many times but on this occasion it was presented in such a way that, for me at least, brought some real clarity.

The question and Jack’s answer is the following:

Q3. Should a woman ever be expected to be a faithful, loyal listener when a man needs to talk things through?

A3. As a theoretical ideal, yes. In reality, no.

A graphic that will be familiar to most of my readers accompanies Jack’s answer. 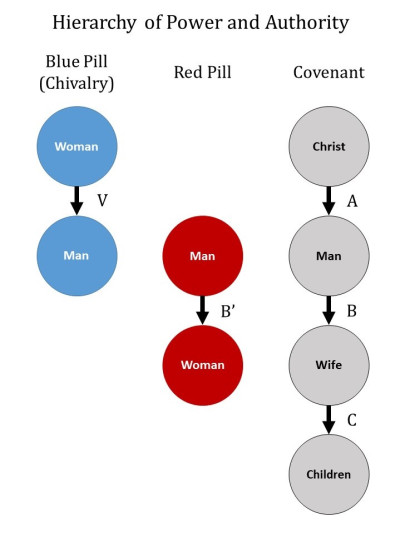 The blue line represents the status quo position on familial power and authority. It is what most of us have grown up believing and as each month goes by it is pushed harder and harder by the global despots. It is a prime source of misery for both parties.

The red line represents what we graduated to as a result of attempting to overthrow our blue pill thinking. But it is limited as it still exists squarely in the secular world. It will grant you some short term satisfaction with a woman who is still invested in the trap of modernity, as indeed you are. In other words, you will exist together as long as it is materially convenient for both parties.

The grey line represents the truth of the matter, (I don’t know why the color grey was chosen as gold would be far more appropriate). In this line we have patriarchy. Man submits to God, wife submits to husband, and children submit to their parents. Deti neatly summed this up with the following comment:

Wife goes to husband with problems.

Husband goes to God with problems.

So far so good. But here is when it dawned on me why the question posed is an abomination. The act of a man unburdening himself of his fears to his wife puts her in a terrible position. It would be as if she unburdened herself in a similar way to her children. Or even more unthinkably, if God had to unburden himself to man.

Consider that for a moment. As men, we look to God for strength. The idea for us that God has any weaknesses at all is abhorrent. It would shatter our belief in God. It would render Him impotent in our eyes.

Eric Silk in a comment summed this up well:

Well… We know considerably less about God’s mind/heart than God knows about our minds/hearts.”

More than that, we do not wish to know God’s heart or mind. It is a burden enough dealing with our own.

Within this context it should be radically clear just how demonic the modern concept of equality is. The coordinated propaganda for men to ‘get in touch with their feelings’ via their female counterparts is not merely self-defeating; it is damning. It is a trap for a man even to contemplate the idea of unburdening his feelings to his wife, let alone to do so. Our women need us to be strong, resolute, unyielding and to have the answers because that is the original deal. That is what female natures demand, just as male natures demand the same from God.

In conclusion I am in disagreement with Jack’s answer to the question on whether a man should be able to unburden his troubles with his wife. The answer is no, period. There is no theoretical ideal, as such a whimsy fantasy leads men directly to disaster. We need to grow up and be resolute on this. Leaders lead. They do not seek the soft reassurance of underlings to moisten their egos. To do such a thing is weakness, and women abhor weakness. As indeed we would do if it were ever presented to us from above.

(As a concluding aside, this is why Satan is in hell – he is weakness personified.)